Now at the Irish Pub of Port Douglas, Paddys! 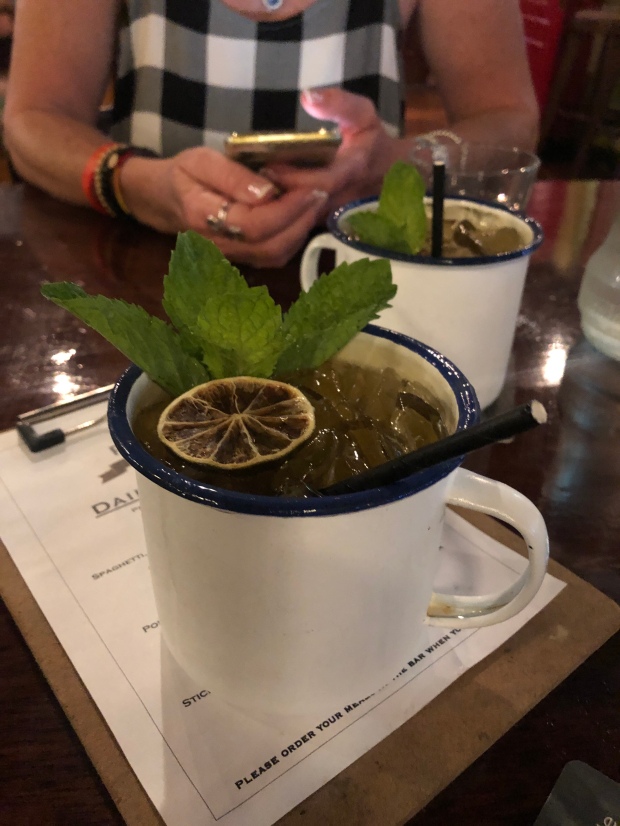 At the Cairns airport, I knew that I would be waiting a few hours for Megan. I was a little hungry. I don’t usually eat the airplane food. Sometimes I even bring some raw veggies but I knew no vegetables or fruits could be brought it. I did bring some toasted walnuts mixed with coconut and a little dark chocolate.

I left the arrivals area and I go into the baggage claim area. No ac here and it was hot. I sat down and figured out a car. Got a great deal of $7 per day. Although not really trusting that quote as it never happens that way, but it actually did. I went up to the car counter and checked on the car, yes it would be ready. There wasn’t any place to have a coffee or drink or food. Someone suggested an outside place. I ordered some Rose but needed food. I saw the international terminal was close by. I had changed into shorts but it was still very hot and very humid. The international terminal was completely empty so I trudged back to the domestic terminal. Asked a nice airport terminal if I could get back into the arrivals area since there were many restaurants and shops. He said just go to the entrance and go through security. Simple. Walked around a bit. Had some calimari and another rose. To get served you need to order and pay at the bar area and then they bring it to you. Did some reading then walked around. Not ready to shop, as if I ever am! Found a little coffee shop by the entrance to the baggage claim so I could see Megan. Sure enough she texted me that she had landed and we went to get her luggage and the car.

The car was as expected, no surprises and we took off for Port Douglas. Several people had told us that Cairns was too big and too commercial and that we should go to Port Douglas. First things first, we were on the lookout for a adult beverage store. Megan knew they had a special name but couldn’t remember it yet.

The roads were two way, on the wrong side of the road. She likes to drive and I like to navigate so it works for us. The drive was beautiful, jungle meets water, Rainforest meets reef. Finally we saw a “Bottle shop” and the clerks couldn’t have been funnier or friendlier. They helped us with our purchases, wine and New Zealand vodka and soda.

We could our hotel/hostel easily where the host was super friendly too. 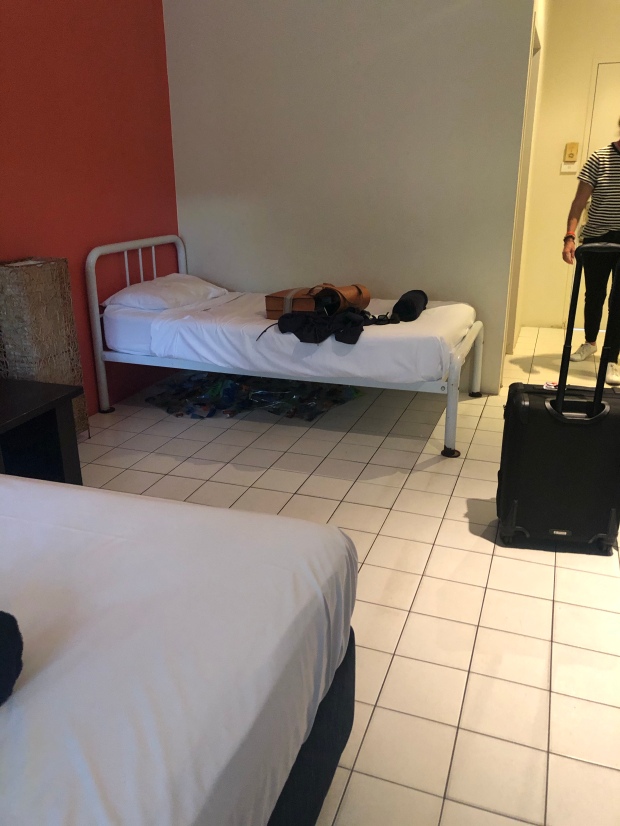 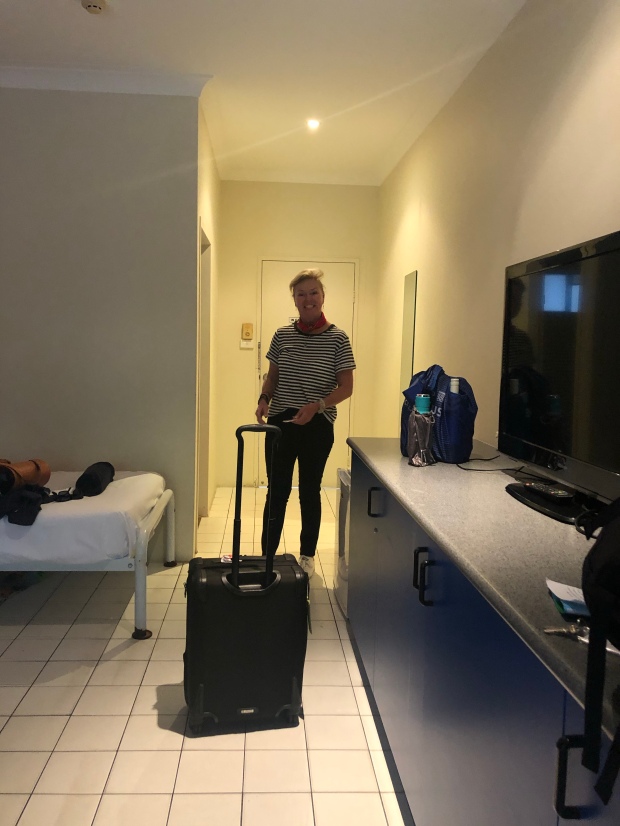 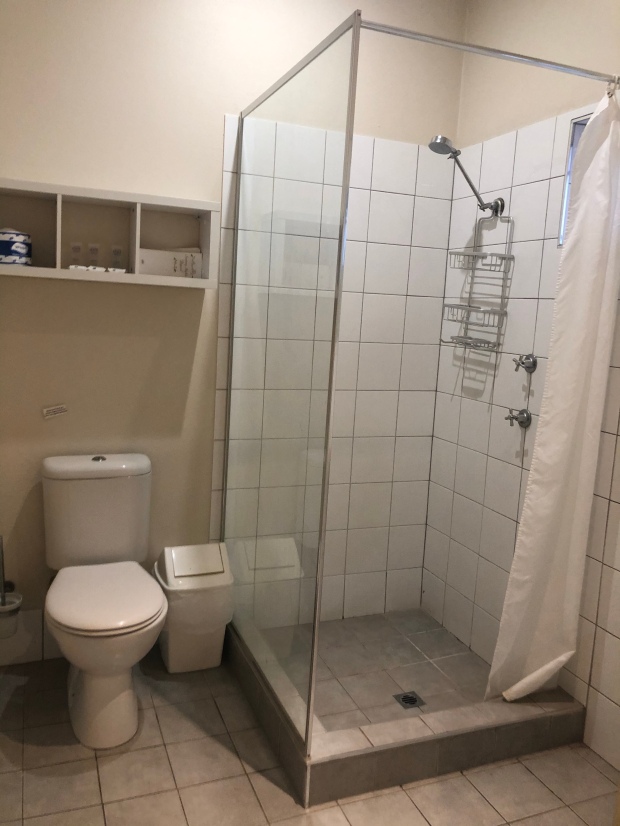 The place was a little like some of the motels on the way from Wisconsin to Florida that I remember from childhood. Two beds, clean, private bathroom and working ac. That is all that we require. 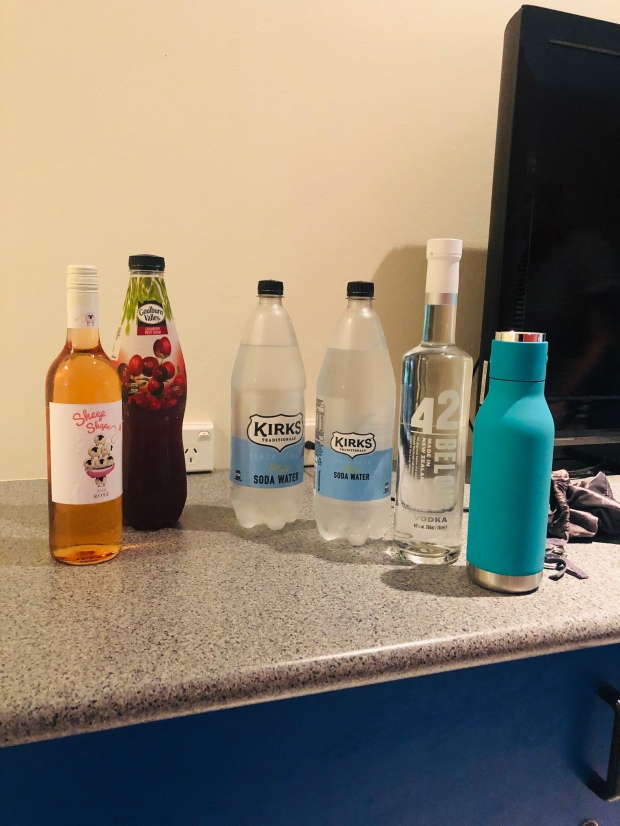 It has a small pool and is about a 20 minute walk from the town. A hot and sweaty walk through a neighborhood on one side and a jungle on the other.

Kinda quite on a Sunday early evening, but we found the Irish Pub and hoped to cool off there.

We ordered from the bar, now we knew what to do. Had some yummy Mango Mojitos.

We split some spaghetti with olives and garlic and sausage and some fries with cheese and pork. Perfect food!

Uber, yes, Uber back to the hotel and off to sleep.

I am at the Cairns airport waiting for Megan. She is in the air which is good! She arrived in Sydney as I was leaving for Cairns. Her messages were not hopeful. She had issues in the Sydney airport too, as I did, then had to check and pay for her bag and was delayed on the tarmac. Luckily, WiFi is better in airports so I could look up her flight info and see that she was on her way. I am waiting outside the airport having a glass of wine.

Very similar to the start of yesterday, or rather Friday when I left San Diego.

I chose my flight, knowing that it would go to Dallas first with a three hour layover and then a direct flight to Sydney. The other routes with miles, had worse connections and longer layovers. I ended up with a window seat, thank God and next to some fun 21year olds that were spending a semester abroad I New Zealand! What what fun they were going to have. I was so happy that my son, George spent a semester in Budapest.

Since it was a 19 hour flight, I knew that I needed to stay awake along as possible. One of the things I love about long flights is that I catch up on reading, I can read a complete novel at one sitting. I like to write in my journal, although this mostly works for that. And I get to watch movies. As I looked around I saw no one with a book, other than me! Also about 10 % of the people on the planes had masks on. Too bad they don’t realize that the coronavirus can penetrate masks, but I brought some too.

As usual, Megan and I don’t have much planned. I just rented a car for the next three days. When she gets here we will drive to Port Douglas. Is just over an hour away. She’ll be the driver and I will navigate. Just saw that there are 140 steps to get to the hotel, and on the map it looks like a straight line!

So Sydney airport was confusing. Friday morning Megan sent me a text asking if I filled out the visa application?!? Last time I checked We didn’t need one but I filled it out. It was a very aggravating site but finally got the response. I got off the plane, followed the masses and then the signs were confusing: choice of Australian/New Zealander or All or evisa. I saw people lining up a kiosk for the evisa, so I thought that maybe that was what I had. Eventually I saw that those people had a different ticket, so I got in the All others line. The lines were very long and many people missed their connections. It’s best to chose the lines closest to the crew and diplomat lines because as soon as all of those people are in, they take the overflow.

I had brought some snacks, because I hate eating the garbage at rest stops etc. There were announcements every few minutes about having a fever and sore throat because of Coronavirus, and they wanted to be sure that we didn’t bring any food or plant items. I had learned my lesson in Tonga so I changed my answer to the question about food from no to yes. Diverted to line 2. Then they just asked what I had. They did not want the chicken jerky in their country, but date balls and nuts were ok.

I must have missed the sign that said Quantas transfers… I was wandering the airport, looking for some coffee and checking the signs about for my gate. No flights. Finally I asked someone where Quantas was and they pointed down the way. Asked again and they said down there to the windows, down the escalator and onto the bus. I had plenty of time but glad that I hadn’t stopped earlier.

I spend a lot of time reading on long flights and this quote holds special meaning for me, an elaboration on my personal motto, Everyday is a Holiday. It’s from my mentor and friend, Scott Manning: “This is the beginning of a new day. You have been given this day to use as you will. You can waste it or use it for good. What you do today is important because you are exchanging a day of your life for it. When tomorrow comes, this day will be gone forever. In it’s place is something that you have left behind. Let it be something good.”

I am hoping that my blog is working! I have my house and dog sitters lined up, which is a big deal. Thank you fam and friends!

Long ago, a priest that our family knew was sent to Australia. He found out that I loved Koala Bears so he brought me a stuffed one upon his return. He had married my

parents but I don’t know if they were very close to him. I would guess that I was 7 or 8, when he gave me this bear. I was the only one that received a gift.

The fur is real, the eyes are gone, but I remember he had them. His claws are plastic. The stuffing is very hard now but I remember loving this bear and I had a smaller one too. That one was a little more “loved” like the Velvetine Rabbit book. I hope to see some Koala Bears soon! 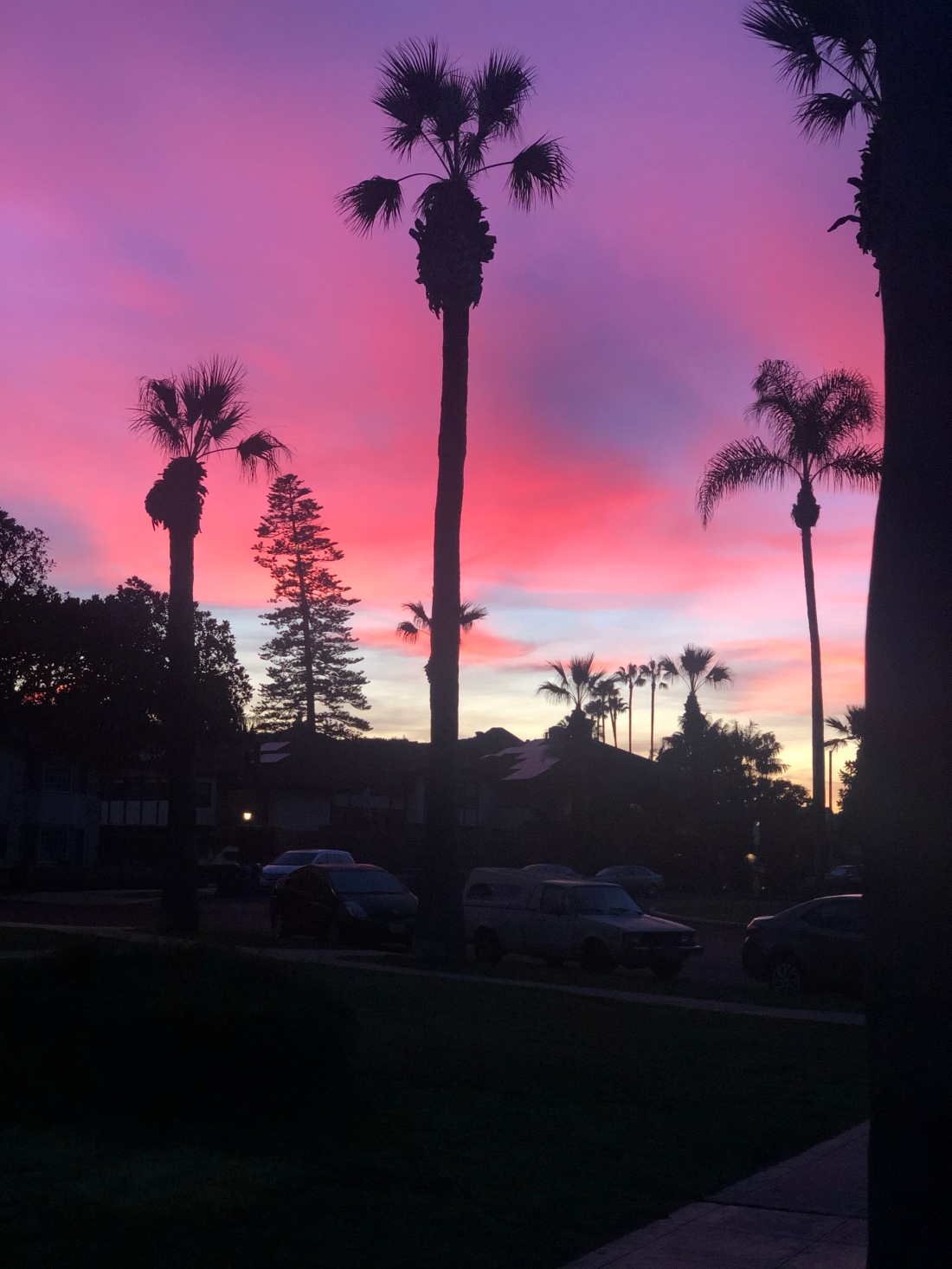 We are leaving this for Down Under!

I am getting ready for my next adventure. I am reading the book, “Vagabonding” by Rolf Potts. I like the bonding part. Travel is kind of a bond with the world.

Travel is the purest form of education.

The world is a book and those that do not travel have read only one page.

Preparation spoils the chance for spontaneity and serendipity.

Attitude is more important than the itinerary.

Preparation is not knowing exactly where you’ll go but confident that you’ll get there.

We do not take a trip, a trip takes us.

Can’t wait for the next adventure!!

“The reason Vagabonding is so appealing is that it promises to show you the destinations and experiences you’ve dreamed about; but the reason vagabonding is so addictive is that, joyfully, you’ll never quite find what you dreamed of.” The best travel experiences are the accidental ones or those that seemed like obstacles but turn into the better stories. Like hurricanes in Tonga…

Nothing makes me happier than planning a trip. When I booked Alaska, I also booked Vietnam for October. After talking to a new friend, I decided to change direction, so I cancelled my flights to Vietnam. Now I am waiting for the miles to go back into my account so I can book Lebanon. It might be too long in one place, but I’ll decide those things later.

My fortune from a Chinese restaurant.

I woke up early and waited for the call from the airline tour. They called and gave me the sad news that the planes wouldn’t be flying. Janet was my back up plan so now I am in her car looking for bears. Took this photo just in case 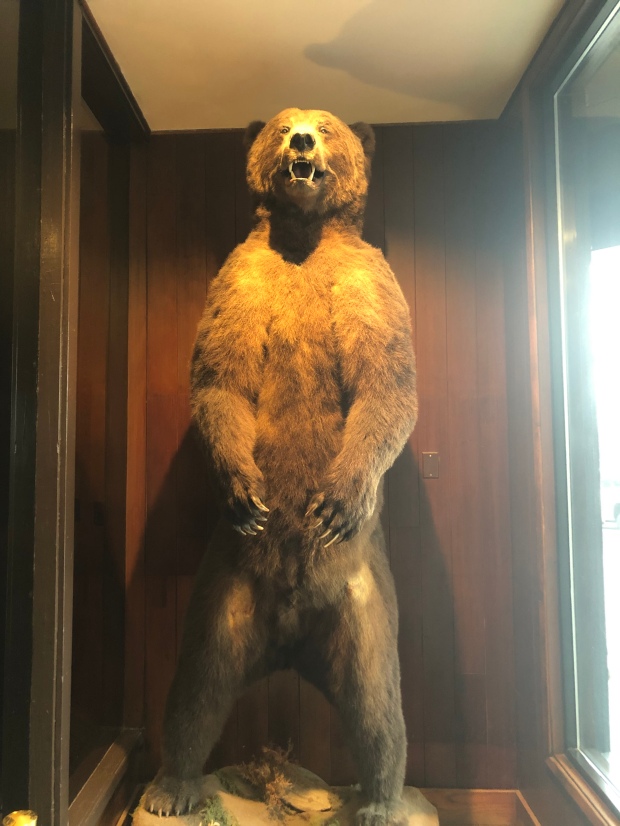 So no bears this trip but we tried. Janet and her other passenger and I drove back and forth on Anton passageway and then to some river mouths. It was a pretty rainy day so I was happy to be in the car since I had to check out of the cabin. Headed to the airport to fly to Anchorage and had a very long layover at the airport. Luckily I had a first class ticket so I could hang out in the lounge. And as I mentioned on a previous blog, judging people can some times surprise you. The woman who was in front of me in security, with a broken wheel on her bag and holding up the line ended up sitting next to me in the lounge. We had a couple hour chat. She lives in Point Loma and is super fun. Flight finally left at 2am. Flew to Portland, then Everett and then home.

Slept in the airports. On the flight to SAN, I had fun chatting with a fellow traveler. Maybe we will meet somewhere. It was a great trip and I look forward to returning to Alaska.